There's plenty of acronyms already but here's a few more for you...

CAT5 cable has been around for quite some time now and for the history of it detailing things like bending radius and other specifics you can always visit https://en.wikipedia.org/wiki/Category_5_cable while not the definitive answer on all things CAT5 it covers most of the basics. CAT5E is what is widely used today and honestly it is able to meet the needs of most homes and small business when it comes to speed and ease of use. Bulk CAT5E is commonly available in 1,000 pull boxes and spools in the following variants, each with a with a wide range of colors to choose from.

CAT6 cable has been available for many years and is preferred in larger businesses as well as homes that may require more bandwidth than the average user. It is sometimes installed as a bit of an overkill but to accommodate future needs which of course is not a bad idea given the speed at which the technology evolves. CAT5 Cabling can handle on average 1GB of data where CAT6 can transmit up 10GB. It is able to do this through several means, first thicker gauge wires which can transmit more data, second by a X shaped plastic divider inside the cable that keeps the 4 twisted pairs separate thus reducing cross talk and noise in addition they have a thicker jacket and insulation which also helps with the integrity of your data.

So while CAT6 is able to to deliver higher speeds by using the measures mentioned above those same measures can make it more expensive and a bit harder to work with. Of course it's a given that with the thicker gauge wires used with CAT6 all of the tools and accessories such as the punch down blocks and patch panels will need to be designed to work with CAT6. One thing worth pointing out is that your connection is only as fast as the slowest piece in use. For example if you actually manage to crimp a CAT5 end on a CAT6 cable (not easy but we've seen it done) while you may or may not notice a difference chances are it won't be as fast as it should or could be. Still CAT6 cable is widely used today and with a complete set of tools and connectors available to work with is not as hard as one would think, it simply take a bit more time to work with and of course the investment is a bit more as well but not being able to predict the future many people are going this route so they are set for years to come and we can't blame them. Even if you've not got every end crimped down perfect or the best wall plate or switch being used simply knowing that the cable that runs through your walls, crawl space and attic won't need to be replaced in a few years when your streaming cute cat videos at 16k... is comforting to say the least.

CAT6 comes in the same options as CAT5 above yet each is rated for higher speeds.

CAT6A as well as CAT7 Cabling have both been around now for years but to some extent they are each pushing the envelope of what copper cabling is capable of and and to some degree, rival the cost of fiber optic technology so neither have been embraced the way it's predecessors have. Because of the complicated nature of working with these types of cables given that to truly reach the speeds that qualify a cable as CAT7 we currently do not offer it in bulk form as very few people have the ability to meet the specifications when working with these products using hand tools etc. Of course we do carry CAT6A patch cables as well as CAT7 Patch Cables and one day may offer CAT7 in bulk but at this time we simply do not.

About Copper Cladded Aluminum otherwise known as CCA - we do not offer it, never have nor will we. Reason being is that it can not match the real copper cable in any way, the only thing it can do is to supply cable at a lower cost. It's like saying you bought a Ferrari, true it's a little toy car your kid rides around in but it still looks like a Ferrari and while you can still call it one... it's really not and the performance is obviously a tad different. Why so harsh, well we feel CCA cabling is horrible and we're not alone, no one can certify it, every governing body as well as manufactures such as Belden or even Fluke Networks who build some of the best testers around all say that CCA is something to avoid. They are not compliant to any industry standard nor do they meet safety requirements. Sure it's cheaper but at what cost? 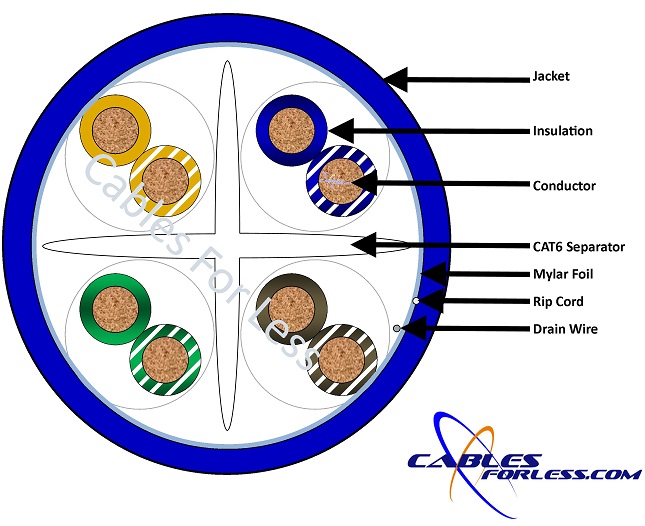 Thank you Belden for the following explanation (found here) as well as putting together a very helpful video tutorial explaining the differences in the many types of shielding available today. We understand that it can be a little confusing and hope this information helps to clear things up a bit!

Specialty cable for uses such as outdoors, aerial or direct burial are also available but typically do not come in the wide array of options and colors the rest do.

If you do purchase network cable in bulk you're sure to need some of the tools and accessories we carry as well. We offer a full line of cable ends, boots, crimpers and punch down tools as well as wall plates and patch panels.